All About Prospects for TAM Users

Can I sync Prospects from TAM to Fuse? How can I identify and market to the Prospects I have in TAM?

Written by Agency Revolution
Updated over a week ago

How to sync Prospects from TAM to Fuse

In order to sync Prospects into your main Fuse list, they must be entered into TAM’s Customers section and given at least one policy record.

Why do they need to be in TAM’s Customer section?

Fuse integration relies on unique Lookup Codes to identify unique accounts and update them accordingly. Unfortunately, if you sync a report from TAM’s Prospects section into Fuse, the duplicate Lookup Codes will cause valid Customer data to be overwritten with data from separate Prospects. For example, this could cause Fuse to retain a Customer’s email address but change their name to a Prospect’s name and have all of their policies removed, which can lead to embarrassing situations like “Lost Customer” emails being sent to active customers, or emails being sent with someone else’s name in them!

To avoid these kinds of mix-ups, a report from TAM’s Prospect database should never be loaded into your Fuse list.

The good news is that there’s a solution: if you enter a Prospect into TAM’s Customer section, TAM will give it a unique Lookup Code.

Fuse integration uses TAM’s “Policies - Current” report. Therefore, an account must have at least one policy on record for TAM to include it in the report. We recommend giving them a policy with Quoted status, even if the information you fill into that quote is just fabricated placeholder data.

How to identify Prospects in Fuse

Accounts synced from TAM to Fuse with no Active or Bound/Future Policies are assigned a “Customer Type” of “Prospect.”

You can use a Segment rule to include or exclude those accounts from an audience.

Note: The “Customer Type” will also be set back to “Prospect" if an Account has at least one active policy in Fuse, and later all of their policies become canceled or expired. Fuse differentiates these lost customers from other prospects by giving them a different "Status". If you specifically want to target prospects that are not lost customers, simply add the rule: "Status Is Not Lost". 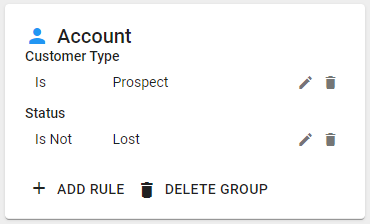 How the New Prospect Event works for TAM users

Did this answer your question?